We now have many bikes in stock.

Stop in or give us a call to see if we have the right one for you! 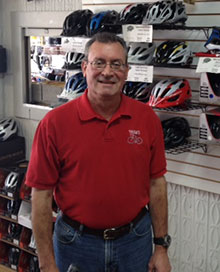 August F. Thumm's mother, discouraged her son was working as a plumber for less than three cents an hour, recommended he consider a different line of work - maybe something with mechanical devices because of his fondness for tinkering and skill with his hands.

Augie Thumm, August's grandson, said his granddad always had an affinity for motorcycles and bicycles, and taking his mother's advice, August F. Thumm went into business with his brother, Karl, selling Harley-Davidson motorcycles, bicycles and tires.

Our Mechanics Are Ready For You!

We specialize in expert bicycle repair. From old dust-covered rigs to custom dream machines, simply bring your bike by and we'll get it running right again!