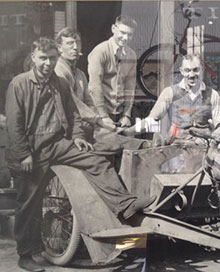 August F. Thumm's mother, discouraged her son was working as a plumber for less than three cents an hour, recommended he consider a different line of work - maybe something with mechanical devices because of his fondness for tinkering and skill with his hands.

Augie Thumm, August's grandson, said his granddad always had an affinity for motorcycles and bicycles, and taking his mother's advice, August F. Thumm went into business with his brother, Karl, selling Harley-Davidson motorcycles, bicycles and tires.

Augie Thumm, owner and operator of Thumm’s Family-Owned Bike & Clock Shop, works Tuesday on a bike at his shop on West Market Street in Warren. This week, Augie Thumm, a third-generation bicycle man, and his wife, Linda, are celebrating the centennial anniversary of the family business.

''Since 1850, Thumms have been in downtown Warren with some business or another,'' Thumm said, mentioning that his great-grandfather operated a bakery along West Market Street for 49 years. The location, the alley just north of Burger King, still is known by many as Thumm Alley.

The shop originally was located across from where it sits now on the West Market Street bend, but a disastrous flood in 1913 forced the family to move to higher ground. The new shop was raised 16 feet and purchased from the Wainwright Brewing Co. of Pittsburgh, which used the building as an ice house, Augie Thumm said.

There the business featured the first gasoline pump in Warren.

Nearby, where Trumbull SCOPE is found now, was the Packard factory, which helped forge a friendship between the Thumm and Packard families. Augie Thumm's great uncle Karl worked in the factory's body works division, and one of his innovations on his personal vehicle was adopted by Packard.

The running board, Augie Thumm said, was that idea.

His uncle had connected the front and rear fenders of his vehicle with a piece of fine maple, and J.W. Packard liked the concept so much, he adapted it to fit the vehicles his company produced. In exchange, Augie Thumm said, Packard offered to pay off the mortgage for the building, but that was off-putting to Karl and August Thumm.

Augie Thumm's uncle Karl also had the distinction of owning the first car on the city's westside, a 1901 Cadillac.

Augie Thumm's father, August B. Thumm, took over the business in 1945, running it until 1989, when Augie took control, but Augie said he and his father both grew up in the business. Tire sales ended in the 1950s to concentrate on bicycles, and Augie expanded the business to include clocks about 23 years ago to bridge the seasonal gap.

''We've always been in the bicycle business, but we've always sold something else than bicycle,'' Augie Thumm said.

He said business now is excellent. Last year was better than the previous, and the first quarter this year also showed an increase.

''I'm selling what people want,'' Augie Thumm said. ''I don't sell things here in my store based on color or something like that. I sell based on the needs of the customer.''

That's helped the business continue to expand. ''There has been pretty steady growth in this business since I can remember,'' he said. ''There's never really been a hiccup or studder step.''

Helping that expansion was the shop's Web site - thumms.com - which was created about three years ago.

The shop now features three brands of bicycle - Trek, Gary Fisher and Specialized - and has more than 1,000 in stock plus a selection of clocks.

In celebration of the 100th anniversary, Thumm ordered for sale 12 custom Trek bicycles, the same kind Lance Armstrong rode in capturing multiple Tour De France titles. The bicycles have been discounted, as well as all other Trek bicycles he has in stock.

© Copyright 2013 Tribune Chronicle | TribToday.com. All rights reserved. This material may not be published, broadcast, rewritten or redistributed.